The Abbey 900 Legacy Advisory Team succeeded the Abbey 900 Steering Group working under the auspices of the Cirencester Community Development Trust to administer the £51k surplus left from £150k plus, raised by the town to run the hugely successful Abbey 900 Festival in 2017.
The first small project completed by the team was enhanced signage for the Abbey Grounds highlighting the Augustinian Abbey of St Mary that stood on the site 1117 – 1539
At the end of 2019, installation of a display of illustrations by the late Kenneth Povah was completed in the Parish Church of St John Baptist, Cirencester. The display is mounted beside the LEGO Abbey and is made up of a selection drawn by Kenneth in the late 1970s/early 1980s to illustrate, in a light hearted manner, the life of canons in the Abbey in the 1400s. 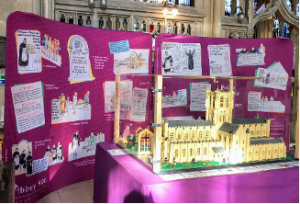 The LEGO Abbey is itself a legacy of the Festival. The model measures 1.9m x 1.6m and the tower is 1m high.
It is constructed of 70,000 LEGO bricks
It was constructed in the Festival year between April – October 2017
For £1 donation, visitors could add a brick to a module of the build which would then be placed on the whole.

Plans are now well in hand for the final project – THE ABBOT’S GARDEN – see below: –

An exciting new installation for the Abbey Grounds, Cirencester

The project is scheduled for completion by 5 September 2021, when it will be dedicated by the Patron of the 2017 Abbey 900 Festival – Rt. Rev. Rachel Treweek, the Bishop of Gloucester.
The proposal to create a monastic garden has been developed by Martin Portus of Portus & Whitton Ltd, a member of the Abbey 900 Legacy Advisory team. Plans include a carved wooden statue representing an Abbot and Canon and a sensory garden.
The Abbot and Canon Statue
Maquette of the proposed sculpture by Tom Harvey.

Presently on view in the Parish Church of St John Baptist 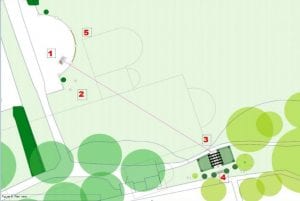 The sculpture will stand by the balustrade in the Abbey Grounds. (1) Attention will then be directed by the stance and attitude of the figures towards the existing metal interpretation plaques (2) and then further beyond, to the new garden (3) and to an arch (4) which frames further explanatory panels. A timeline is also proposed to be mounted on the existing plinth of the stone balustrade (5).
The Abbey 900 Legacy Advisory Team under the auspices of Cirencester Community Development Trust Ltd has been pleased to work with Cirencester Town Council in the development and implementation of the project, which has been made possible by the community’s support of the Abbey 900 Festival in 2017.